Keeping up with players on the ice

Sometimes the pace of life speeds up and it’s tricky to keep up. This is especially the case with intense sports, like ice hockey. In fact, NHL players can reach speeds in excess of 20 miles (32 km) per hour on the ice. In scenarios like this, it can be challenging to broadcast all games across a number of stadia, especially when they were often relying on amateur ‘producers’ to cover many of the games. It was this challenge that faced media streaming company LiveArena, and they turned to Hikvision and studio automated (innovated with Dutch research institute TNO) for an AI-enabled solution to automate the production process.

LiveArena is a global company, based in Sweden, which manages and delivers more than 30,000 live events around the world each year. They are constantly looking for ways to improve the access of their services, and to make the user experience more engaging.

Traditional coverage of an ice hockey game was typically restricted to the high level games only – that meant the ‘premier league’ teams. Broadcast media could only afford to hire cameramen for those games. So, fans of the sports who follow other teams were not able to see their favourite teams in action through streaming media. LiveArena needed to find other ways of recording the games often relying on family members of players. To do this, the solution would need to be one where they were in full control of the production at all the arenas.

LiveArena also wanted to be able to improve the scheduling, production and graphics overlays.

Another issue was posed by the sheer speed of ice hockey. These meant that a traditional camera solution could not give clear enough images. In fact, they could sometimes give a false ‘shadow’ of a player, due to the fast moving action.

studio automated developed an algorithm to track the game of ice hockey. Hikvision customized the firmware for its 32MP PanoVu IP camera (2CD6984G0) to maximize its integration with this algorithm, so that it could keep up with the game’s speed. This was made possible because of the 25 fps framerate and the 4K sensors of the PanoVu camera.

This upgrade involved the use of AI predictions to help the camera figure out the likely position of the action and the players. The information is combined with tracking to give a more accurate footage of the game. It is then streamed to users on their mobile apps, or any other connected device with a browser and the ability to play back live H.264 content, so they can enjoy the game live wherever they are.

The camera provides a high resolution 180° spliced image, with a full panoramic view. It’s also robust enough to cope with the elements outside on the field, with a built-in heater protecting it against temperatures up to -40˚C. It’s also IP67/IK10 water resistant to IP67 standard and vandal proof to IK10.

Armed with these technologies, LiveArena can open up the game to fans, wherever they are and whoever they support. They can broadcast every game from arenas with the fully automated support.

The solution has also delivered additional features like the Manual Situation Room (MSR). Since the Hikvision camera captures the whole field LiveArena can do analyses of specific incidents after a game. For example, referee boards can review any instances of a game that might result in additional penalties, like a severe rule breaking that could result in the player being stopped from participating in future games. This analysis of a game can also help coaches to train players.

Pontus Eklöf, LiveArena COO, says: “We are thrilled about what this solution has done to our live game video production. Not only do we broadcast more games. We also have a better video quality for the viewers in combination with a whole lot of new features. All of this benefits the viewers, the ice hockey federations and the individual clubs.”

This project covered 130 ice hockey stadiums throughout the Nordic region, and there are plans to implement the solution in another 300 this year. LiveArena is also looking at using multiple cameras to further enhance the viewer experience both for online game viewers as well as video coaches and other ice hockey professionals. So, it seems the solution is keeping up with this high-speed game in more ways than one.

AI software that functions as both film crew and director 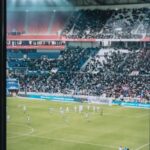